Spotlight on the History of Aviation Manufacturers 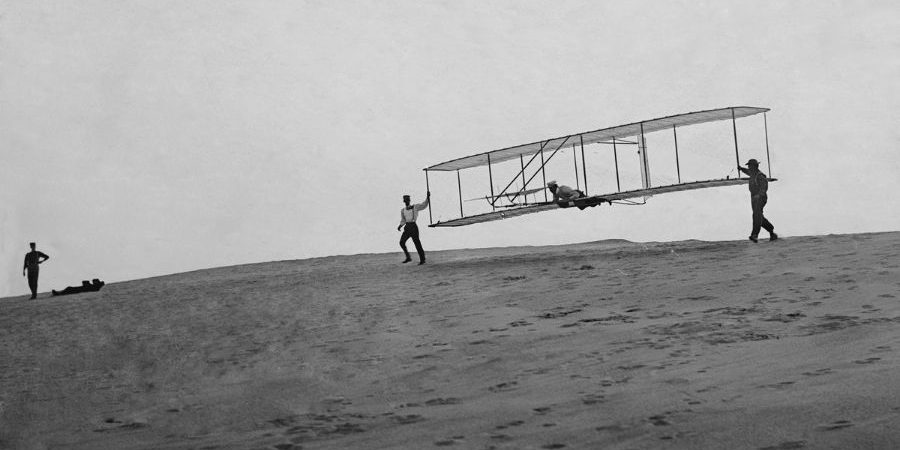 A Spotlight on the History of Aviation Manufacturers

In celebration of International Civil Aviation Day, we want to celebrate all brave souls who dedicate their life to serving the aviation industry with a look at the history of aviation and some of its manufacturers.

Despite the fact that the modern aviation industry originated in the military, it eventually made its way to civil applications. Civil aviation originally started as a mail service, has expanded to include passenger transportation, leisure travel, corporate travel, agricultural applications, law enforcement, media, and even more.

But let’s start at the beginning where it all began…

The birth of aviation occurred when Leonardo Da Vinci amongst his many inventions and ideas, sketched out the flying machine.

Enormous wings connected together by a wooden frame, the inside space would allow the pilot to lie down and move the wings up and down through a crank.

While the idea seems impossible to be implemented, that was the very first time the concept of planes was brought to light.

The flying machine was unfortunately never built in his lifetime, however it was most certainly a major stepping-stone of where we are today.

Read our tips and guidance on buying a private jet. You can also download our buyers step by step checklist that will include many considerations when buying an aircraft.

Get Your Checklist Here

Inventors of the First Aircraft

Moving a little further from Leonardo’s inventions and ideas we get to the Wright Brothers. We have heard all about them over the years from our schools, documentaries and in books.

Two brothers, Orville and Wilbur Wright who were Americans with brilliant minds, had the idea of inventing the first airplane by looking at a toy helicopter. The brothers eventually took the fascination to the next level and started experimenting with flights.

They travelled to Kitty Hawk in North Carolina (known for its strong winds) where they observed the way birds would angle their wings and started from there.

Eventually on December 17, 1903 they successfully made their first flight and gained excessive fame and wealth in the coming years, especially in Europe.

Soon enough the military began showing their interest in the airplanes created by the Wright Brothers and bought their own bi-plane from the brothers for 25,000 dollars.

The first scheduled commercial airplane flight was on January 1st, 1914 and was from St. Petersburg, Florida and Tampa, Florida.

Soon enough there was an introduction of other aviation companies and the world became what it is today, state-of-the-art A380s (largest passenger aircraft) and private jets which redefine luxury and comfort and advancement at the speed of lightning.

A Brief History of Private Jets

The first official private jet to ever exist was the Lockheed Jetstar who was in the business from the 1950s up until the 1970s, with their first flight on September 4th. While they were the first to venture into the private jet business they weren’t successful as a business as you would expect.

For many years they provided the largest size of this kind of aircraft seating 10 and two cabin crew. The highest speed the Lockheed Jetstar would get to is 925 km/hr and had a wingspan of 17 m.

Private Jets. A Rise in Popularity.

The whole dynamic and concept of private jets changed and gained immense popularity in 1963 with Learjet, now called Bombardier Learjet, being the first to manufacture private luxury aircraft.

Bombardier Learjet, the Canadian-owned aerospace manufacturer that specialises in making business jets for civilian and military use is based in Wichita, Kansas, United States.

The assembly of the first Learjet began in 1963 and the initial design contained six to eight seats. Their first flight took off in October 1963 and flew high in success onwards. One of the main reasons why it gained such high popularity was its extremely swanky and classy design compelling celebrities and businesses to own one of their own.

Another reason – its incomparable performance. It was known to fly as fast as a transatlantic Boeing 707 and with the ability to rise up to 40,000ft, it could out climb a US Air Force F-86 Sabre.

For many years the Bombardier Learjet continued to remain on the top when it came to business jets and still continues to remain in the market, however just like anything else that exists in the market, there are bound to be competitors and with a peak comes a period of stagnancy or downfall.

Let’s get into details of the top aircraft and private jet manufacturers to date and a little about how they evolved over the years.

While everyone knows that Airbus is one of the leading companies in aircraft manufacturing they’ve created quite a name for their corporate jets as well.

Known to be one of the most modern, sleek, luxurious yet comfortable jets in the world, Airbus Corporate Jets have gained immense popularity over the years for their customisable and spacious cabins and providing its owners with a luxurious and memorable flying experience

Currently, Airbus Corporate Jets have about five products available, differentiated by the size of their bodies, their ranges, the internal space, engines and layouts.

Their jets can incorporate up to twenty-five passengers and have revolutionised travelling.

Beechcraft Aviation took their start during the 1930s and was mainly focused on building their famous Staggerwings for the US Army during World War II where they built about 270 of them for the army.

Beechcraft now a brand of Textron Aviation since 2014, was originally a brand of Beech Aircraft Corporation, an American manufacturer of general aviation, commercial, and military aircraft, ranging from light single-engined aircraft to twin-engined turboprop transports, business jets, and military trainers.

Soon enough they ventured into business transport and commuted airline and released their popular King Air and Super King Air that are widely used even today. While they don’t cater to as much luxury as the Airbus Corporate Jets, they were highly popular during their peak and hold an amazing history.

Back with another highly popular name in the world of aircraft and aviation, Boeing Business Jets.

First taking flight on February 9th 1969 with the 747, Boeing is famous far and wide for their highly safe, luxurious and sturdy aircraft and their business jets are no less.

A class of their own, Boeing offers a wide range of products all customisable in accordance with the requirements of their customers. And currently on their website, they have four variants to offer for you to choose from.

In 2018 Boeing launched the longest range business jet ever with BBJ-777X that who’s opulence and grandeur caught the eyes of many.

So whether it’s beauty, luxury, class or comfort along with the guarantee of being safe and reliable, Boeing continues to be the top of the line when it comes to manufacturing business jets.

Bombardier Inc is a renowned Canadian manufacturer of business jets that formerly made commercial jets and even transport vehicles were founded in 1989.

They are popularly known for their Dash 8 Series 400. Even though they made commercial aeroplanes it was their business aircraft that helped them gain the most popularity.

Founded in 1927 The Cessna Aircraft Company was an American general aviation aircraft manufacturing corporation based in Wichita, Kansas. Later in 1985, they were purchased by General Dynamics, then by Textron, Inc., in 1992.

The focus for Cessna Aircraft has always been small piston-powered aircraft and business aircraft and for much of the mid-to-late 20th century, Cessna was one of the highest-volume and most diverse producers of general aviation aircraft in the world.

In March 2014, when Textron purchased the Beechcraft and Hawker Aircraft corporations, Cessna ceased operations as a subsidiary company and joined the others as one of the three distinct brands produced by Textron Aviation.

Currently, they have three types of aircraft available in the market namely Piston, Turboprop and Citation all built with the same finesse and quality. The three series have somewhere between three to six versions available in each.

- Pioneers for Military and Business Jets

When we think modern, contemporary and popular, we immediately think of Dassault Aviation.

The French aircraft manufacturer has been in the game since 1929 and still manages to keep up with the latest trends and requirements. Dassault’s domain has always been military and business and has always been one of the pioneers in this field.

The most popular of Dassault’s business jets are the Falcon series, containing seven different aircraft each more advance and beautiful than the one proceeding.

Their most latest Falcon 10X can only be described as the epitome of luxury, comfort, versatility and technologically advanced.

Currently offering four business aircraft in the most stunning and captivating styles Embraer utilises cutting edge technology and design techniques all the whilst incorporating sustainable practices to deliver the ultimate business aircraft experience.

You can even customise your aircraft using their Visualisation Tool to personalise the aircraft in accordance to your liking. They are also known to be one of the best-sellers of light jets, the Phenom 300 for the ninth consecutive year.

Founded in 1958, Gulfstream Aerospace is an American company and has produced about 2000 aircraft since they first started out in business.

Currently they are offering six different sleek and well-built business aircraft for you to choose from with their Gulfstream G700 known to have one of the most spacious and carefully curated seating space in a jet and can accommodate up to 13 people easily and sleeps up to 8. This particular aircraft also contains four living areas.

In the vast world of aviation, business jets are one of the most valuable and sought-after assets.

Business jets were created for those who want complete privacy, security, and safety when flying. These high-end jets are utilised by the state’s most powerful people.

Because business aircraft are specifically designed to save time and effort, their owners place a high value on time. On the other hand, certain legal duties related to ownership, maintenance, and staff management could be a hassle for business owners.

Our qualified team takes pride in ensuring that your aircraft is always ready to fly. We ensure that anytime our client needs their aeroplane for a trip, it is ready for takeoff.

To keep everything in order we manage flight planning, maintain aircraft in perfect condition, and ensure that your flight crew is experienced and energetic.

So if you’re planning to buy a business jet or looking for a reliable partner, KJET is here to serve your needs.

Leave a message or give a call, our representatives are available 24/7 to answer your queries.

Article Name
Spotlight on the History of Aviation Manufacturers
Description
In Celebration of International Civil Aviation Day, we want to celebrate all brave souls who dedicate their life to serving the aviation industry with a look at the history of aviation and some of its manufacturers.
Author
Kirsty Wheeler KJET
Go to Top