Getting To Know Dassault Aviation

You are here:
Latest JournalsManufacturer News 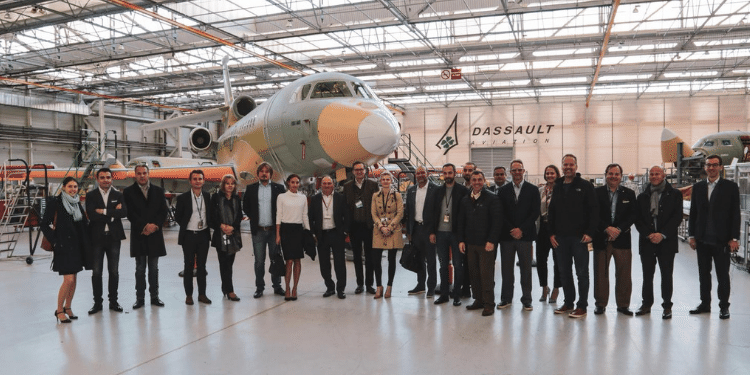 With a British mother and American father, I spent most of my youth flying to and from the UK and US, which is where my passion for aviation and aircraft began. Back then I could never have imagined I’d get the chance to work within the private jet industry, let alone fly in one.

Now some 17 years later, having been fortunate enough to have a career I love, in an industry I love, the thrill and enjoyment of flying in a private jet never ceases. And certainly, the one great thing about not being a pilot is getting treated like a passenger!

So as you can imagine I was absolutely delighted to receive an invitation from Dassault to attend their famous and well-desired factory tour in France. The opportunity to spend time getting to know more about Dassault and their rich 100-year family heritage and of course the chance to fly in a Dassault was clearly something not to turn down!

Specialising in business, regional, and military jets, Dassault was founded back in 1929 by Marcel Bloch, who then changed his name to Marcel Dassault.

Still building fighter jets today, this aircraft manufacturer is and continues to be, one of the top innovators of private jets.

Having always been a fan of the company and their aircraft, being able to visit the various factories and assembly lines dotted around France, as well as experience the everyday running of their company, was truly remarkable.

What I was particularly impressed with was how some parts of the aircraft are still built by hand.

Although I was expecting the parts to be built by robots and machines, seeing the meticulous care taken by the ‘craftsmen and women’ whilst working on intricate aircraft parts, demonstrated how Dassault to this day have mastered their work through deliberate practice.

Clearly, one of the reasons Dassault aircraft are loved by so many today, not only as an aircraft but also as an artistic creation.

France Flight in a Dassault Aircraft

The Falcon 8X entered service in late 2016 and is widely recognised for its superior performance.

With its 6,450 range* and short-field performance, the Falcon 8X rival’s its competitors by offering more reach compared with other aircraft in its class.

The Falcon 8X also boosts ‘unbeatable economics’ with operating costs some 35% lower than other aircraft in its class. If however, these things do not delight you, the passenger experience was arguably one of the best.

Having the longest cabin in the range, with over 30 internal layouts to choose from, Dassault has certainly not overlooked passenger comfort. The Falcon 8X has low noise and cabin altitude and high air quality, helping you to experience less jet lag on arrival and feeling better overall on board.

For me, one of the most noticeable benefits was the low cabin noise level. During the flight, it was even possible to hear the conversation of the group sitting in the front club 4, whilst sat at the dining table! I could go on about how magnificent this aircraft is, but you would be reading this all day!

The most popular Dassault aircraft, and arguably the world’s favourite Falcon of all time, the Falcon 2000S combines all the requirements of a modern business jet but at a significantly lower cost.

Dassault describes the Falcon 2000S as being ‘simply ahead of its class – an aircraft that combines the discipline of a fighter jet with four decades of business jet leadership’. And who am I to disagree! As KJET’s first aircraft under management, I concur!

Leading up to its ninth month in operation the aircraft has yet to let us down (touch wood!) in terms of performance and productivity, and of equal importance, it is very frugal when it comes to fuel.

Similar to the Falcon 8X, cabin comfort and passenger experience have not gone forgotten. With a 6 feet 2 inches cabin height and a true wide-body cabin, you can stand more easily (especially if you are only 5 feet 6 inches like myself) and move around more easily too.

So if your budget doesn’t quite stretch to the Dassault’s Falcon 8X aircraft and a mid-range aircraft is more suitable to your flight requirements, the Falcon 2000S aircraft might just fit the bill.

So, of course, it wouldn’t truly be a tour in France without wine!

Much to my surprise not only have the Dassault family been aviation pioneers, but they became interested in fine wines and purchased Château Couperie in 1955, thereafter changing the name to Château Dassault.

Dassault Wine Estates is now one of the largest vineyard holdings in Saint-Emilion and has the rank of Grand Cru Classe. In true French hospitality, we were given the opportunity to explore the vineyard, learn more about the history of the company, and of course try the Dassault Château wine from ranging vintages.

All of which was followed by a superb 3 course sit down dinner. A fine evening had by all!

Not only does Château Dassault and the Dassault Wine Estates epitomise the entrepreneurial values of the Dassault Family, but also demonstrates their permanent search for excellence.

And for those wine lovers out there fear not! Every purchase of a Dassault Aircraft comes with your very own case of the Chateau Dassault wine!

If you’re thinking of becoming a jet owner and in particular a Dassault aircraft, we can only highly recommend this manufacturer.

As such, we have put together this ‘Jet Buyers Guide and Checklist’ you may find useful. Simply click here to read more about the steps you need to take or get your download guide and checklist here